​LONDON — Dissent from European shareholders during the 2021 AGM Season was at its most significant on the subjects of director elections, remuneration and share issuances, according to a new report by Georgeson.

In its 2021 AGM Season Review of shareholder meetings in the UK, the Netherlands, Germany, Spain, France, Switzerland and Italy, Georgeson defines a resolution as having experienced 'significant' dissent if it is contested by 10% or more of the total votes cast.

The report found that there was a 37% increase in contested director elections across the seven markets compared to 2020.

The report also found that remuneration-related resolutions were the most contested category, experiencing an 18% increase in shareholder dissent year-on-year.

France and Switzerland faced the most significant increases in shareholder dissent against directors, experiencing a proportional year-on-year growth of 77.3% and 142%, respectively.

In France, this result marked an increase in director elections opposition after two years of sustained decreases. 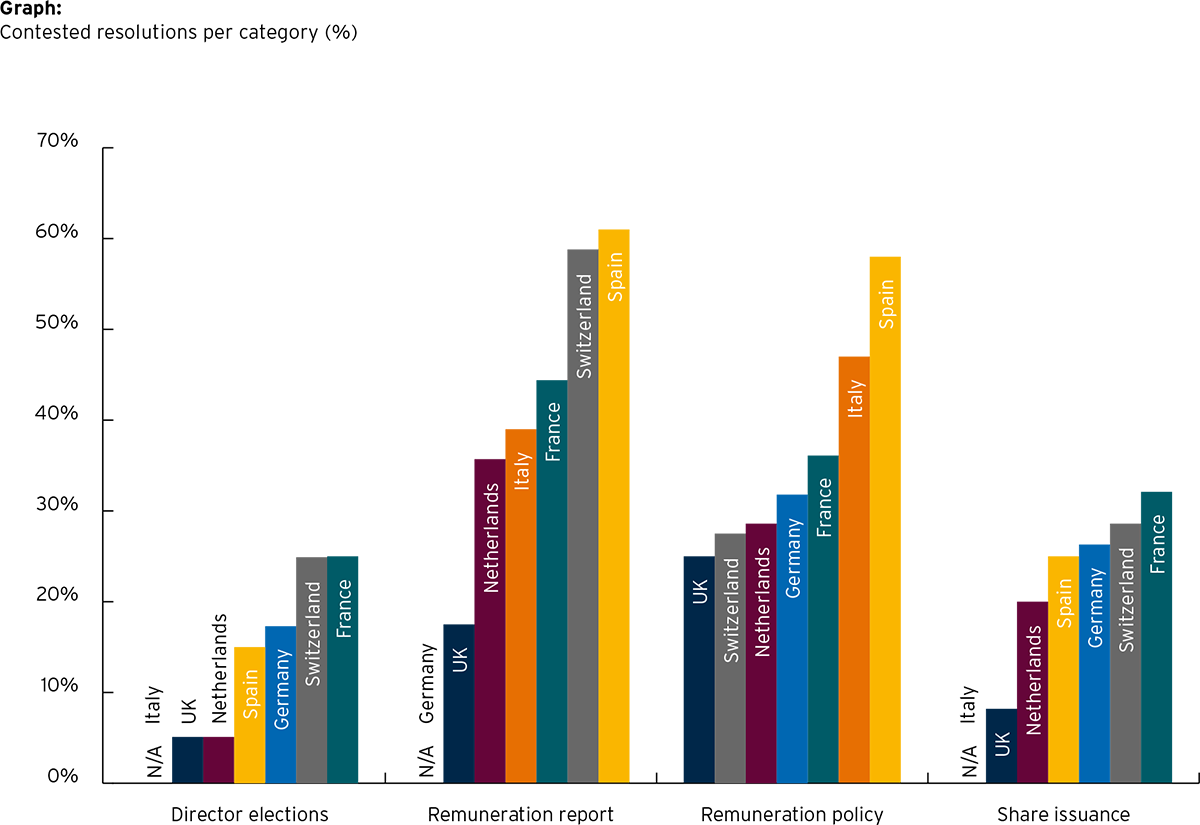 "Similarly, we saw shareholders leveraging votes against directors to show their displeasure on particular issues such as climate change and other environmental concerns.

"More investors are also opposing resolutions to issue new shares, likely to protect against share dilution and reduce the chance of possible takeovers.

"The increased opposition to votes on remuneration, director elections and share issuance is a warning for companies to focus on their shareholder engagement and education, particularly during the off-season."

The issues of climate and sustainability also grew in popularity among investors this year in both Europe and the US.

Georgeson found that at least 15 companies in the seven European countries covered by the report put forward 17 board-sponsored Say on Climate resolutions that resulted in voluntary climate disclosures.

There were only two such board-sponsored resolutions in the US, although this was combined with a large increase in climate disclosure shareholder proposals. The US saw the highest number (33) of environmental and social proposals passed.

During the 2021 AGM season, proxy advisor ISS supported all Say on Climate resolutions based on a view that climate strategy transparency allows shareholders to monitor progress effectively and express their opinions on future developments.

In contrast, Glass Lewis has argued that climate transition should remain the board's prerogative and abstained from voting on Say on Climate resolutions at five company AGMs and recommended against another two.


For any media enquiries

Georgeson is the world's foremost provider of strategic shareholder services to corporations and shareholder groups working to influence corporate strategy. We offer unsurpassed advice and representation for annual meetings, mergers and acquisitions, proxy contests and other extraordinary transactions. Our core proxy expertise is enhanced with and complemented by our strategic consulting services, including solicitation strategy, corporate governance analysis, vote projections and insight into investor ownership and voting profiles. Our local presence and global footprint allow us to analyze and mitigate operational risk associated with various corporate actions worldwide.