By mid-March, proxy season is beginning to kick into full swing. Many U.S. public companies are finalizing the proxy statement for their annual meeting and have determined the ballot items that will go to a shareholder vote, including director el​​​ections, annual say-on-pay votes and any shareholder proposals that were not excluded or withdrawn.​

The "off season" window for shareholder and proxy advisory firm engagement has effectively closed and companies with specific voting issues will often need to wait until after proxy advisory firm voting recommendat​​ions are issued before they can engage in supplemental calls or meetings with investors. Proxy advisory firms, institutional investors and asset managers are working to recommend and vote upon thousands of proxies in the next few months and their bandwidth for engagement with companies is extremely limited.

Ideally, a company will have begun preparing for this year's proxy season months ago by establishing an ongoing dialogue with its key investors and the proxy advisory firms to ensure that the company's story is understood and the company is aware of investor concerns. Incorporating feedback from prior engagements in proxy statements and other public disclosure can demonstrate that the dialogue is productive and help garner support for a company's management and board. Companies are more likely to be caught off guard by a negative voting recommendation or shareholder vote if management is not adequately familiar with relevant voting policies, has not clearly articulated the company's facts and circumstances or does not appreciate emerging issues of concern to the company's investors and the proxy advisory firms. However, even well prepared companies can run into bumps during proxy season. For example, mid-cap and smaller companies may find it almost impossible to schedule engagement in the off-season, giving them less visibility into how company-specific issues are perceived. Or a large company that has historically had high support on say-on-pay may find their compensation story more complicated based on 2016 financial results or other issues.

Whether a company knows that it has challenging issues on the ballot or expects smooth sailing into the shareholder vote, it is important to anticipate investor concerns and proxy advisory firm voting recommendations when drafting the proxy statement and determining the scope of any proxy season engagement. We summarize below some key steps that companies can take between now and their annual meeting to ensure the best voting results, including strategies for mid-season engagement in an evolving and crowded landscape.

The proxy statement is a critical communication tool. Companies should ensure that the proxy statement goes beyond mere regulatory compliance and clearly and concisely articulates the company's story. This includes priorities and developments that the company wants to highlight about its long-term business strategy, executive compensation goals and corporate governance policies as well as other issues that are of importance to a company's investors.

The proxy advisory firms formulate their voting recommendations almost exclusively based on information contained in a company's proxy statement. Likewise, many investors, particularly smaller investors with less robust internal governance teams, will look only within the four corners of the proxy statement when analyzing and screening proxy voting decisions. The more effective a company's proxy statement disclosure, the less likely it is that a proxy advisory firm or investor will miss or misinterpret important information. If the information on which these important decisions are based is incomplete, incoherent or otherwise unclear, a company may be stuck scrambling when a negative recommendation or vote comes in.  As a result, key points should be given prominence in a reader-friendly manner with graphics, illustrations, summaries or other highlighting.

A company's proxy statement disclosure will of course be driven by facts and circumstances that are company-specific, including the company's financial performance, compensation practices, governance profile, long-term strategy, and industry as well as its shareholder base and history of shareholder engagement. However, there are several issues that should be on the radar screen for most companies during the 2017 proxy season. These include, without limitation:

Board Composition, Diversity and Evaluation

Board Oversight and Responsiveness

Once a company files its proxy statement with the SEC, management will be more comfortable speaking with investors and other constituents without inadvertently triggering a Regulation FD violation. Companies that anticipate a thorny issue with their annual meeting may be anxious to continue the engagement process. However, the proxy advisory firms will typically not engage with companies after the proxy statement is on file until they have issued their voting recommendations and calls can be difficult to schedule. Likewise, many investors will not provide any feedback during this period. As a result, companies may find themselves with only a week or two before the date of the annual meeting to defend a negative voting recommendation.

S&P 500 companies that have registered for ISS's draft voting recommendation review process will receive a draft report reflecting ISS's voting recommendations, typically two to three weeks in advance of the annual meeting. These companies will then have approximately 48 hours in which to respond to ISS with any updates or clarifications or, if possible, engage via a phone call. This year, Glass Lewis permitted a limited number of companies to sign to receive a free issuer data report. The reports will be distributed approximately three to four weeks prior to the shareholder meeting and companies will generally have 48 hours to review the report and provide any suggested corrections to Glass Lewis. However, the issuer data reports will only present data upon which the voting recommendation will be made and not the actual draft voting recommendations.

It is important for companies to respond quickly and completely in a situation where they believe that ISS or Glass Lewis has made a recommendation based upon information that is missing or misinterpreted. Companies can attempt to schedule a call or a meeting, which may be challenging given time constraints, and should prepare written materials to clearly explain any perceived gaps in information. Glass Lewis in particular will generally not schedule calls with companies during the period from February 1 to June 30, asking that companies engage and highlight additional information only via e-mail. Companies may determine to amend their proxy statement or file supplemental soliciting materials if additional disclosure would be helpful in educating investors and proxy advisors.

One of the most sensitive issues for boards and management is when one or more directors receive a negative voting recommendation from a proxy advisory firm and/or a low vote from investors. Understanding the facts and circumstances that might lead to a negative director vote and addressing any issues through engagement and disclosure, to the extent possible, is critical. Directors should not be caught completely off guard by a negative recommendation. Even companies that have not embarked on robust engagement programs can review publicly available policies and obtain information on the voting history of particular investors in order to be educated with respect to potential red flags.

Shareholder support for directors remained high in 2016 (Russell 3000 – 96.1% votes cast; S&P 500 – 97.4% votes cast.) For many companies, one of the most significant factors influencing director support is a negative ISS voting recommendation against individual directors, committee members, or the entire board. There are a broad range of issues and circumstances in which the proxy advisory firms may issue a negative voting recommendation or investors may vote against the re-election of directors.

As the table below illustrates, one of the key factors continues to be a lack of responsiveness to shareholder concerns. This can be either real or perceived. For example, a company may engage in extensive engagement after a poor say-on-pay vote and incorporate changes into its compensation policy in response, but if these measures have not been clearly disclosed they may not be given credit for the responsiveness. Other issues, such as "zombie" directors who received less than 50% support the prior year remaining on the board may be harder to defend, depending upon the circumstances. 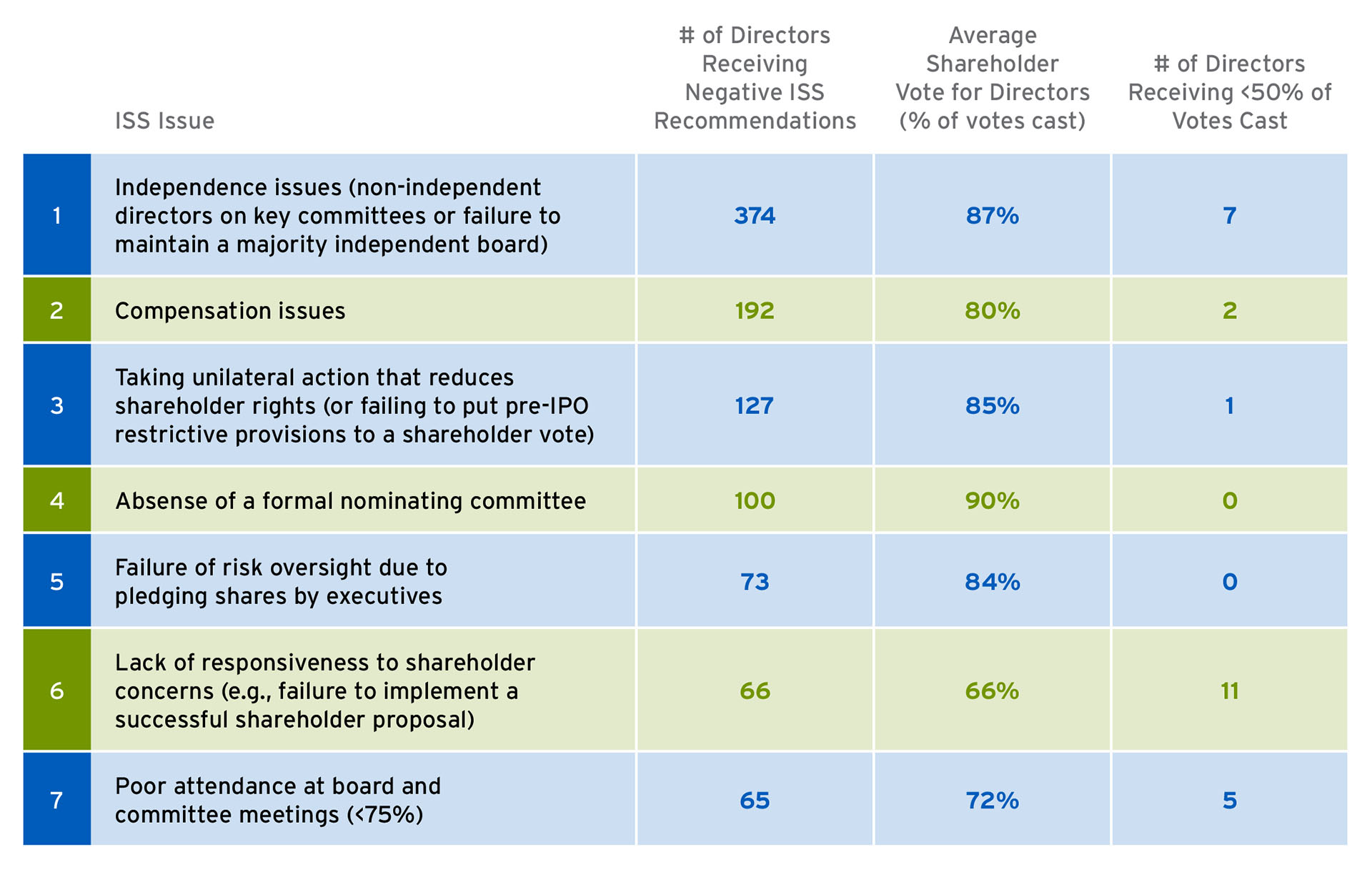 The period between the filing of the proxy statement and the annual meeting is a time when companies should be engaging in strategic and targeted engagement, tailored to the potential issues surrounding their annual meeting. For companies that face a negative ISS or Glass Lewis voting recommendation, or have an issue that they know will trigger negative shareholder votes, this is a critical period. A company could even find itself the target of a "vote against" campaign on its directors launched by an activist or social agenda investor after the filing of the proxy statement. But this is not necessarily a time for panic.

A targeted shareholder outreach campaign can provide useful dialogue and clarification about the company's circumstances and shareholder views and in some cases even turn around a negative vote. Companies can work with advisors during the weeks and days leading up to the shareholder meeting to devise engagement and solicitation strategies that best fit the company's size, shareholder profile and meeting issues. Key considerations include:

Preparing for Next Year

Whether the 2017 proxy season is tame or tumultuous, a company's efforts and interactions will help lay the groundwork for ongoing engagement. Companies should consider conducting an annual meeting post-mortem, particularly if there were ballot items or votes that did not go as expected. Feedback, whether in the form of direct engagement or a voting recommendation or position, should be considered in preparation for off-season engagement leading into next year's proxy season. Analyzing investor voting data, when available, can help a company understand where targeted engagement might be most useful. Investor and proxy advisory firm policies and priorities will continue to evolve and preparation for the 2018 proxy season begins now. ​