The 2018 proxy season resulted in the highest say-on-pay failure rate since 2012. 51 companies or approximately 2.5% of the Russell 3000 companies during the period January 1, 2018 to June 30, 2018 received less than majority support on their say-on-pay proposal. Considering the full-year period from July 1, 2017 to June 30, 2018 there were 57 companies with a failed say-on-pay vote. In this report, Georgeson has an​alyzed the voting behavior of the top 10 investors at these 57 companies. We reviewed the voting data1 for the following top 10 investors (based on assets under management):


How Likely was an Investor to Vote Against a Say-on-Pay Proposal that Failed?

Almost all of the top 10 investors voted against greater than a majority of the say-on-pay proposals that failed. Only BlackRock and Fidelity Management voted against less than half of the failed proposals (see Figure 1). BNY Mellon voted against 9 out of every 10 proposals, or at 43 of the 48 companies where it owned shares. 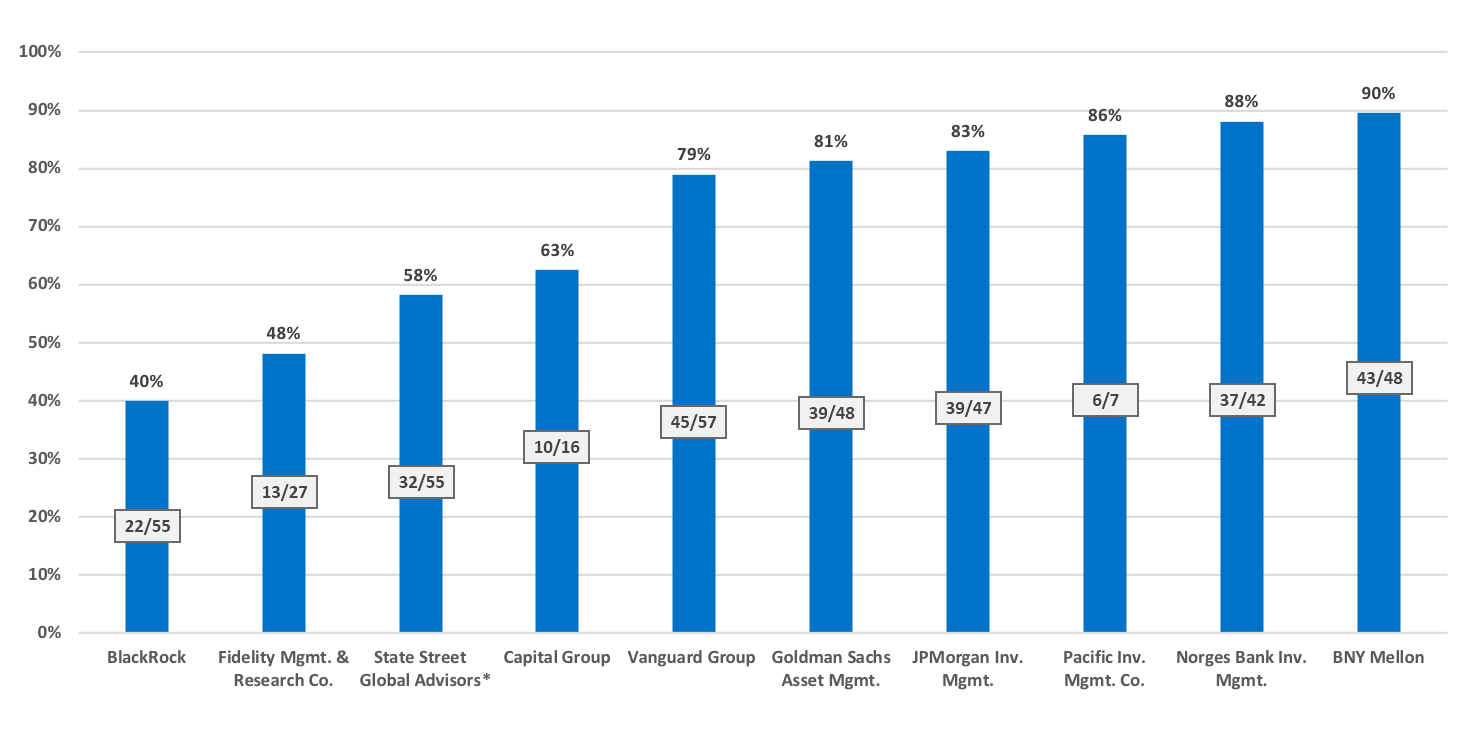 Note: Not all investors owned shares at each company or had information available as to how they voted.

*Does not include abstain votes


In addition to voting for or against, State Street also voted abstain during the 2018 proxy season to indicate a qualified support. State Street’s policy to vote abstain became effective in March 2018. State Street voted abstain in cases where it concluded that the company’s compensation practices were not fully aligned with its expectations, but not sufficiently misaligned to warrant an against vote. Of the 46 failed votes between the beginning of March and the end of June 2018, there were 9 instances2 (approximately 20% of the total) where State Street voted abstain. During this same period, State Street cast an against vote at 27 (approximately 59% of the total) or three times as many proposals.

How Likely was a Company to Receive an Against Vote from these Top 10 Investors? 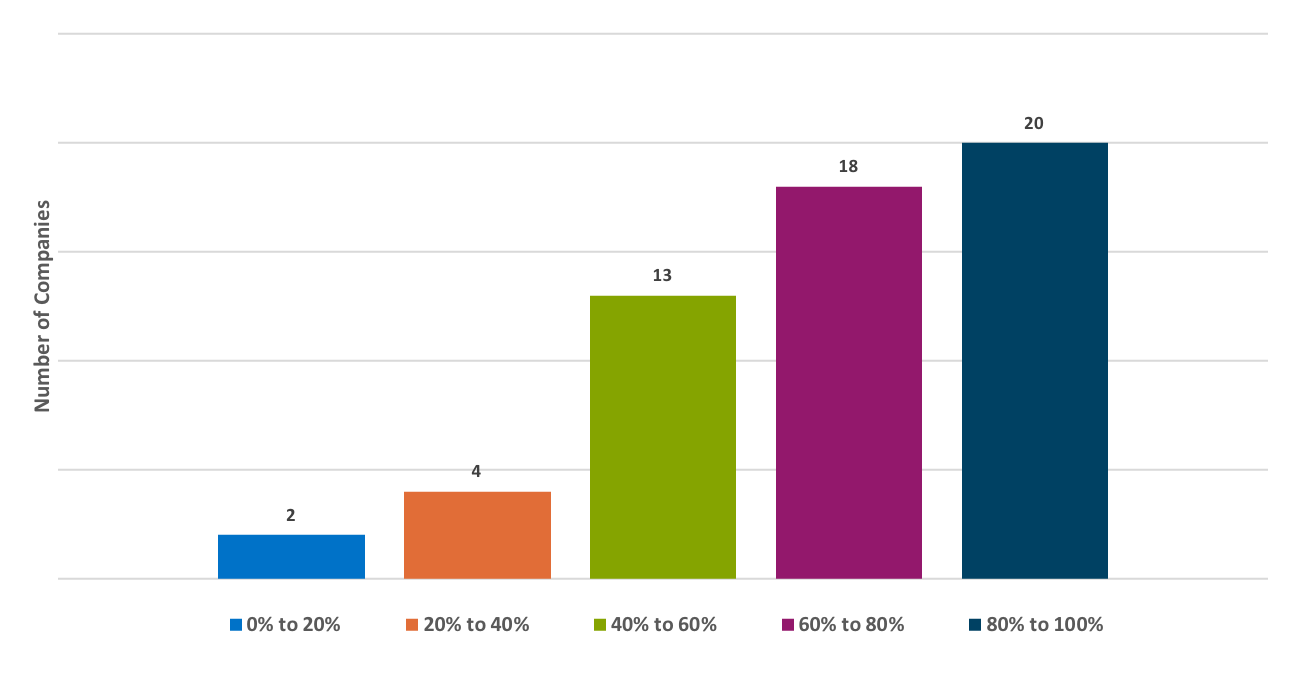 Note: Not all investors owned shares at each company or had information available as to how they voted.​


For the two companies in the lower range of 0% to 20% opposition, none of the top 10 investors voted against.

In the upper range of 80% to 100% opposition by the top 10 investors, 11 out of the 20 companies received an against vote from 100% of the top 10 investors that held shares of their stock. A review of ISS reports for these companies suggests that outsized equity grants, increase in pay opportunities despite share price underperformance, and lack of disclosure of performance goals for incentive payouts likely contributed to the widespread shareholder opposition.

What ​was the Influence of Top 3 Index Funds Investors?

The top three investors and the biggest passive managers BlackRock, Vanguard Group and State Street have more than US$13 trillion in total assets under management and hold significant voting influence. The three taken together, have the largest shareholding in 40% of all publicly listed firms in the United States.

We analyzed the influence of these investors by looking at their ownership3 at the 57 companies (see Figure 3). At these companies with failed say-on-pay votes, the big three owned an average of 18% of the shares outstanding and were responsible for a quarter of the votes that were cast. BlackRock and Vanguard Group each influenced on average approximately 11% of the vote while State Street’s influence was 5%. 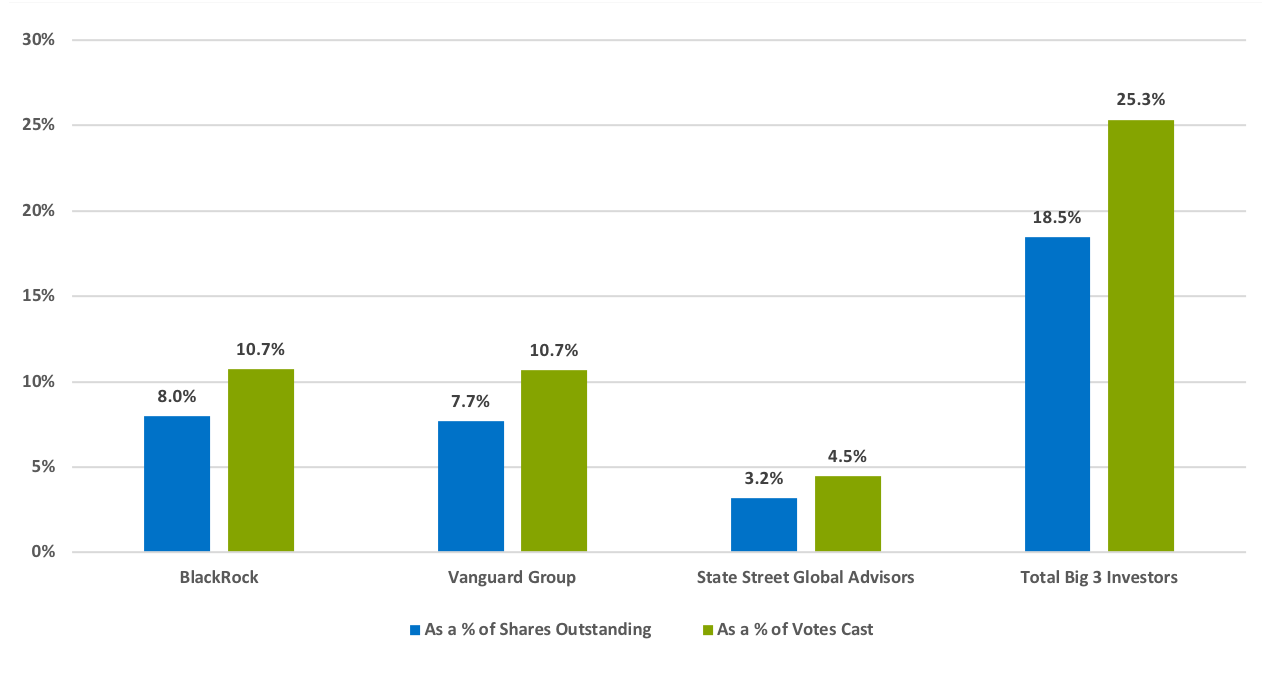 
​How Correlated Were the Votes of Any Two Investors?

While we expected to see generally positive correlation between investor votes given the average opposition of approximately 63% at these companies, we performed an analysis to assess the strength of correlation between the votes of any two investors (see Figure 4). It was surprising to find that no two investors showed a reading above 0.5 that would have suggested a strong positive correlation4. The highest correlation was 0.47, between BlackRock and Fidelity Management & Research Co. Vanguard Group’s votes showed the weakest correlation with those of any other investors, with a few even negatively correlated, although very slightly. It is interesting to note that two of the big three investors, Vanguard and State Street, showed almost zero correlation in their votes.

*Note, there weren't enough observations to calculate correlation between Fidelity Management and Norges Bank. Correlations for Capital Group and Pacific Investment Management Co. were excluded for the same reason.

Lack of strong correlation among investors’ votes at these failed say-on-pay proposals suggests that how one of the investors voted was not a strong signal as to how another one would vote. Early negative votes by some of these investors does not mean that others among these investors would be non-supportive, as well. It also means that engagement with investors​ should not be a one-size-fits all approach. Even among the key index investors, there are differences in the likelihood of gaining their support and the issues they focus on. Companies should understand the key issues an individual investor considers in its analysis, and in their outreach try to mitigate any concerns associated therewith. Demonstrating awareness of an investor’s priorities when communicating your story will show that you have done your homework and best position you to gain the investor’s support.


1We would like to acknowledge Proxy Insight, who provided the data used in writing this report. The data relates to the list of the companies with failed say-on-pay votes and their vote results, and the share ownership of the top 10 investors at these companies.

2State Street’s voting information is available for 55 out of the 57 failed companies. Of these, 9 failed say-on-pay votes occurred between 7/1/17 and 2/28/18 when State Street’s policy to vote ‘Abstain’ was not yet in place.

3For ownership information, we looked at the big 3 investors’ 13-F filings as of 3/3/1/18, which was the closest period to the meeting dates for the 57 companies.