Here are the instructions how to enable JavaScript in your web browser.
Vanguard announced updates to its proxy voting guidelines earlier this month. The updated policy guidelines became effective as of April 1, 2019. The voting policies have been reorganized to align with Vanguard Investment Stewardship's four pillars of governance: Board composition and effectiveness, Oversight of strategy and risk, Compensation, and Governance structures. The most significant policy updates are to the Board composition category, especially on the issue of "overboarded" directors. The key policy updates are summarized below.

Board Composition and Effectiveness

The most significant change relates to Vanguard's adoption of a new policy on overboarded directors. Under this policy:

Vanguard may vote for an overboarded director if the director has publicly committed to stepping down from the additional boards to fall within the thresholds listed above.

Georgeson has identified 230 NEOs who sit on more than two public company boards who are likely to be affected by this policy. Similarly, there are 142 non-executive directors who sit on more than four public company boards. Most of the affected directors and companies are likely not to have adequate time to address the overboarding issue for the current proxy season. The companies whose director(s) would run afoul of the above mentioned board limits should consider reaching out to Vanguard to communicate any potential reduction in board memberships that an affected director may be considering. The companies should also consider providing any information or context that would help explain or mitigate any overboarding concerns (which primarily relate to director effectiveness and ability to devote adequate time and attentiveness to each board position). ​ 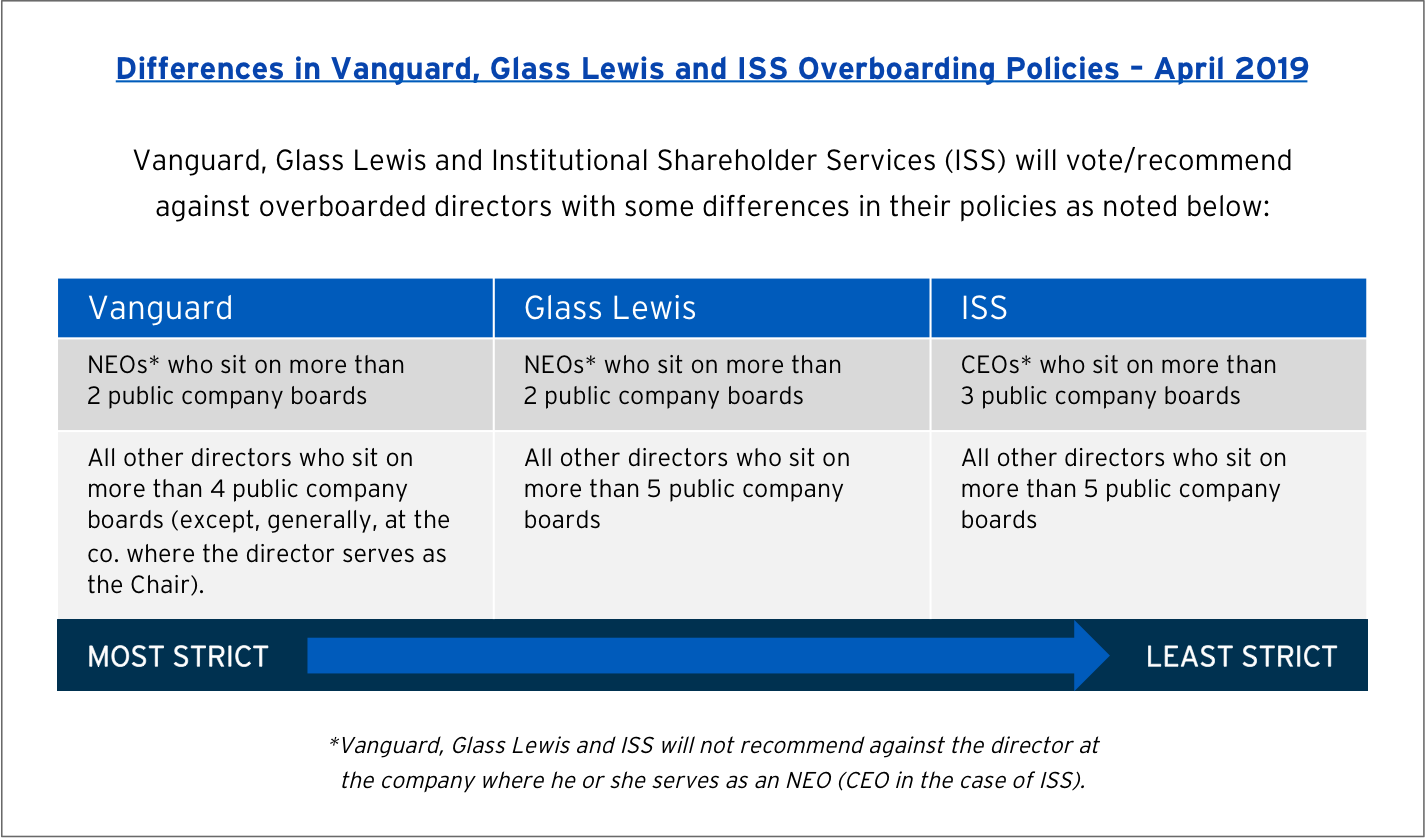 Vanguard has updated its policy to provide that it will vote against certain directors in cases of perceived governance failings or to escalate an unaddressed issue. While many of the topics addressed under this process were included in Vanguard's prior guidelines, the escalation process is a notable revision to the guidelines, as are some of the thematic categories. The key additions are noted below. ​​

Lack of majority board independence

The issue of "Zombie" directors – directors who fail to get a majority of shareholder votes but remain on the board due to a plurality voting standard – is a new addition to Vanguard's policy. Vanguard will vote against the chair of the nominating committee if the board re-nominates so called "zombie" director(s) who failed to receive majority support and the board has failed to address the underlying issue driving shareholders' opposition to the directors(s).

Lack of responsiveness to shareholder proposals

Vanguard's revised guidelines now clarify the specific directors from whom it will withhold support in case of non-responsiveness to shareholder proposals. Vanguard will vote against the independent chair or lead independent director and members of the governance committee if the board fails to respond to a shareholder proposal that received the support of majority of financial ownership at a prior year's shareholder meeting.

Note, that Vanguard has made the distinction between financial and voting ownership to account for situations where certain shareholders (often insiders) hold disproportionately higher voting authority due to ownership of shares with super-voting rights. In such instances, a shareholder proposal may fail to receive majority vote support, although under one-share, one-vote principle, it would have received majority support.

Vanguard has expanded the discussion of how it assesses contested director elections. In its case-by-case analysis, Vanguard has indicated three key areas of focus: 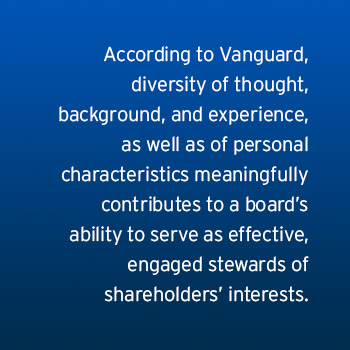 To promote diversity on boards, Vanguard will support disclosure of a broad set of director characteristics, including race, ethnicity, national origin, age and gender through both its engagement and voting efforts. Accordingly, it has updated its voting guidelines to specifically address diversity-related shareholder proposals, providing that it will support such proposals if:​

Independent chairman of the board

Vanguard has provided an expanded discussion of its policy position relating to independent chair shareholder proposals. Vanguard considers board leadership structure to be a board matter and will therefore generally vote against a shareholder proposal to separate the roles of chair and CEO, unless there are significant independence or board effectiveness concerns based on consideration of the following factors:​

Oversight of Strategy and Risk 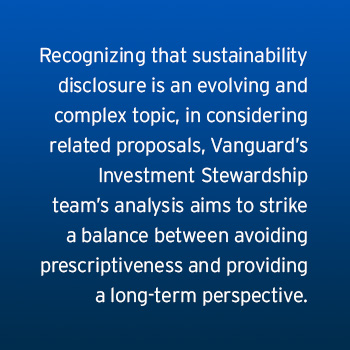 Vanguard has expanded the discussion of its approach on environmental and social issues to provide distinct guidelines for both its approach to shareholder proposals requesting environmental/social disclosure and those requesting the adoption of targets, goals, or environmental/social policies or practices. In its case-by-case approach to environmental and social disclosure proposals, Vanguard notes that each proposal will be evaluated in the context that the board is ultimately responsible for oversight of strategy, including sustainability risks and opportunities that have a demonstrable link to long-term shareholder value. Accordingly, it is likely to support proposals that aim to address any disclosure gaps, reflect an industry-specific materiality-driven approach and are not overly prescriptive. In determining its vote, Vanguard may engage with the company and/or the shareholder proponent.​​

Vanguard again takes case-by-case approach to proposals that prescribe adoption of environmental and social goals or policies and practices. However, the revised policy seems to suggest that its support of these types of proposals may be more limited, noting these proposals sometimes cross from governance into management territory, and that shareholders often do not have adequate information to judge whether management and the board have failed to implement an appropriate strategy.  Interestingly, the guidelines note that if a proposal seems reasonable, Vanguard may engage with the company to understand its perspective and implementation of any related strategic priority, even if Vanguard does not support the shareholder proposal.

Vanguard will now vote in favor of proposals seeking to increase authorized common stock amounts by up to 100% of the current share authorization. Previously, Vanguard supported an increase of up to 50%.

Vanguard recognizes that norms and expectations vary by industry type, company size, company age and geographic location and therefore, it has added guidelines intended to be preferences for executive compensation. Vanguard has added lists of issues that would raise "red flags" and "yellow flags" when it evaluates say on pay proposals.

High dilution and excessive burn rate are two of the factors that are likely to cause Vanguard to vote against equity plan proposals. In its updated policies, Vanguard considers total potential dilution (including all stock-based plans) in excess of 20% of shares outstanding to be problematic. Previously, Vanguard allowed for up to 15% dilution. Vanguard has similarly increased the allowable burn rate (annual equity grants as % of shares outstanding) limit from 2% to 4%.

Vanguard has elaborated on its policies addressing shareholder proposals related to the right to call special meeting and to act by written consent by specifying the conditions that will influence its voting decision.

With respect to its support of shareholder proposals relating to action by written consent, Vanguard will generally vote in favor of the proposal if a company does not provide the right to call a special meeting.

Considerations for Engagement with Vanguard

In its role as an engaged shareholder, Vanguard encourages companies to discuss their governance practices and principles through public disclosure or in engagements with Vanguard. Vanguard has published "Common questions for portfolio companies" that it would like companies to address on the topics of board composition, oversight of strategy and risk, executive compensation, and governance structures. Vanguard considers these four principles as the basis for long-term value creation by boards.

Vanguard has also published a guide for company boards and management on "Engaging with Vanguard".  The guide provides an overview of the benefits of engagement, the four principles (as outlined above) that frame Vanguard's approach, and some practical engagement considerations.