Here are the instructions how to enable JavaScript in your web browser.
​In this report, Georgeson highlights key observations and trends related to investors' support of proposals seeking to separate the roles of board chair and chief executive officer ("independent chair proposals") during the 2020 proxy season.1 In particular, we assess the likely impact of the ongoing COVID-19 pandemic on 2020 vote results for the 44 proposals voted during this period.

Independent chair proposals have been prolific since the mid-2000s and were the most common type of governance proposal voted last year. Despite their popularity, these proposals have experienced average support in the range of 29% to 32% since 2012, with only one proposal having received majority support in the last five calendar years. Accordingly, there has been a relative surge in shareholder support this proxy season, averaging approximately 35%, with two proposals receiving majority support and 15 receiving support in excess of 40%. The COVID-19 crisis seems likely to have fueled shareholders' focus on improving board oversight effectiveness by requiring an independent chair. To examine the likely impact of COVID-19 on shareholder support, Georgeson analyzed and compared the voting results during the five-year period leading up to and including the COVID-19 crisis with the five-year period surrounding the financial crisis of 2008. As illustrated below, our analysis found key similarities between the two crises' impact on voting support for independent chair proposals.

The Impact of Crisis on Shareholder Support

Support for independent chair proposals ranged on average between approximately 29% to 32% during the prior four years. In comparison, average support to date in 2020 increased significantly to 34.9%, which represents the highest average support observed since the time of financial crisis when in 2009 these proposals averaged 34.2% support. 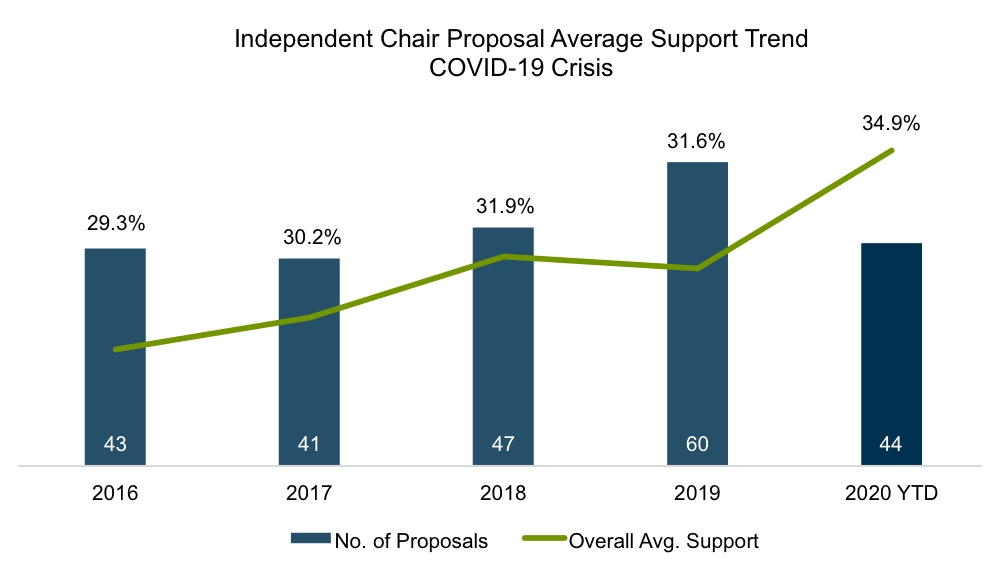 After witnessing only one proposal pass in the past five calendar years (at Rite Aid Corporation in 2018), two proposals passed this year at Baxter International and The Boeing Company. In addition, 15 proposals received support in excess of 40%, compared to seven such proposals in 2019.

The COVID-19 crisis seems to have contributed to this increased support, with shareholders seeking the increased board oversight that an independent chair structure might provide during a time of crisis. In comparison, looking at the shareholder support trend for independent chair proposals during the most recent prior crisis, average support for independent chair proposals had similarly jumped from 29.6% to 34.2% in 2009, coinciding with the year when major stock market indices hit their lows – in March 2009 – in the wake of the 2008 financial crisis marked by the bankruptcies of Bear Stearns and Lehman Brothers. 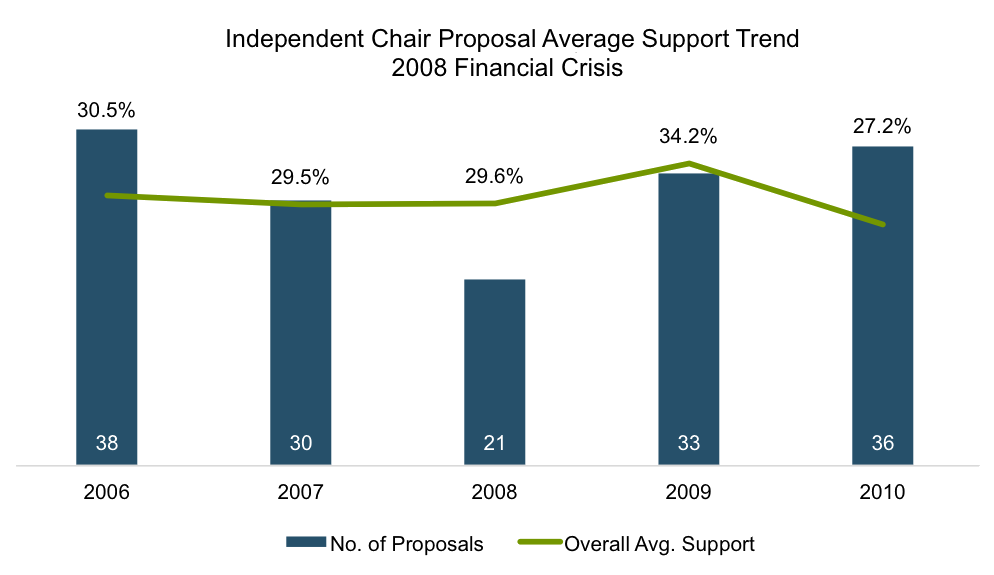 ISS Recommendations as a Factor

ISS recommended in favor of a significantly greater percentage of independent chair proposals during 2020 as compared to 2019, although still well below its levels of support during 2016-2018. Therefore, the increased average support during 2020 seems to be driven more so by individual investors' decision-making. This demonstrates that investors made case-by-case decisions with respect to these proposals, likely taking into account their own governance priorities as well as the specific information companies shared with them during engagement. 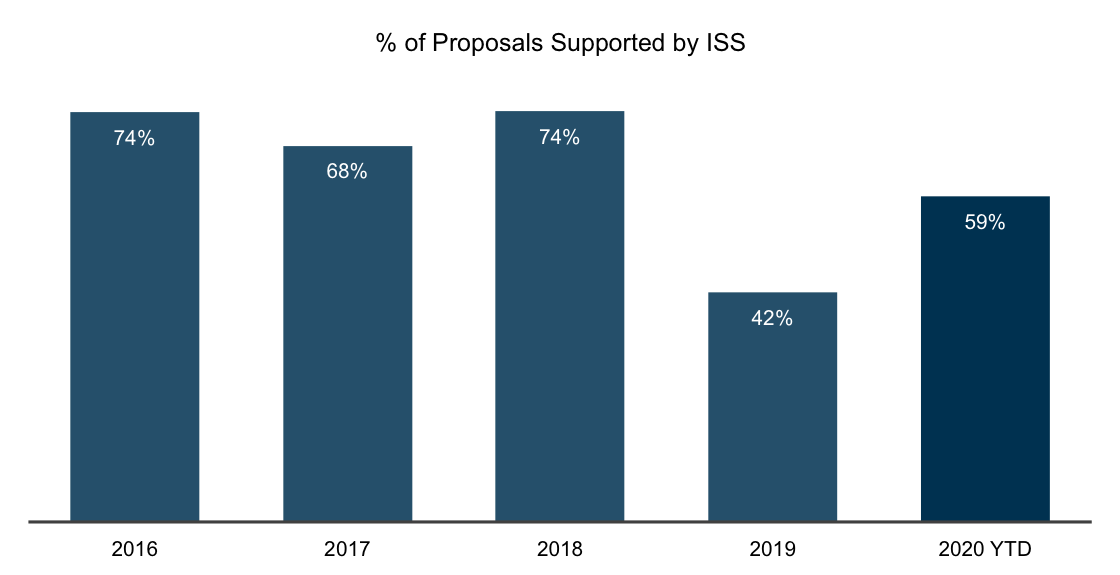 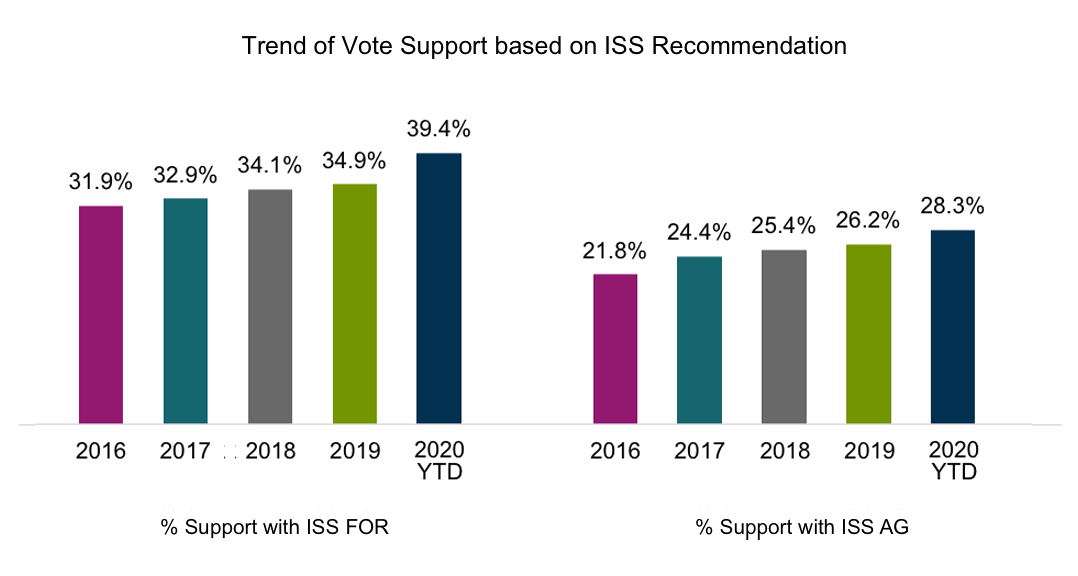 A review of the ISS's rationales underpinning its favorable recommendations during 2020 found that business challenges that demanded full CEO attention and leadership structures that risked undermining even a robust lead independent director were notable reasons for supporting independent chair proposals, more so than particular governance practices at the target company. For example, in supporting the proposals at both General Electric and Johnson & Johnson, ISS pointed to the benefit of having an independent chair to allow the CEO to fully focus on addressing the business challenges faced by the respective companies. At AT&T and IBM, ISS supported the proposal to thwart the potential risk of creating a three-headed leadership structure of CEO, executive chair and lead independent director during a period of CEO transition. ISS indicated in these instances that even a robust lead independent director role may not effectively counter-balance two non-independent leaders.

Distribution and Results by Sector

The Health Care sector was the most frequent recipient of independent chair proposals during 2020, accounting for one in every four proposals. Most of these proposals were submitted by the members of the IOPA. In their supporting statements at these target companies, in addition to raising specific board leadership and governance concerns, proponents highlighted business practices they perceived as high risk.
The Industrials and Utilities sectors were also popular targets for these proposals, accounting for another quarter of the proposals submitted through the end of June 2020. Real Estate was the only sector that did not receive a single proposal, as has been the case in the past few years, having been targeted only once since 2016.

In terms of shareholder support, the two sectors that experienced the highest average vote for this proposal were the Information Technologies and Consumer Staples sectors with 43.3% and 42.2% vote respectively. One proposal each in the Health Care (Baxter International) and Industrials (The Boeing Company) sectors received majority support. The proposal at Baxter received the highest support this proxy season, with 55% of the votes cast in favor. Although the company maintains a combined chairman and CEO position, it has an independent lead director with robust duties. However, the proponent raised the lead independent director's 19-year tenure as a factor compromising his independence. While ISS did not identify any significant shareholder rights concerns at Baxter, it supported the proposal on the basis of a recently identified material weakness that resulted in financial restatements, suggesting the need for greater board oversight. The proposal at Boeing received approximately 53% support despite the fact that the company had an independent board chair in place. The grounding of the 737 MAX airliner following two deadly crashes, and the associated concerns relating to the culture and safety issues at the company raised questions about Boeing's board failure in executing its oversight responsibilities. The support for the proposal is to supposedly ensure that the company continues to maintain the current structure by adopting a policy requiring an independent board chair.

Investors' view strong, independent board leadership as a matter of particular importance, especially when it comes to board oversight and accountability to shareholders. While many investors recognize that an independent lead director with robust duties can be an acceptable alternative, they are increasingly expressing a preference for independent board chair.Taking a historical view of this topic, it appears the preference for an independent chair gets stronger during the time of market wide crisis. With a quick stock market rebound currently but persistent economic and social challenges presented by COVID-19 that are not expected to subside in the near future, it will be interesting to see how these proposals fare during the 2021 proxy season. One thing, however, is certain: independent board oversight and leadership will remain an area of investor focus into 2021 and beyond.

2 Two proposals were voted at each of these sectors