On March 21, 2022, the Securities and Exchange Commission (SEC) issued rule amendments that would require a domestic or foreign registrant to include certain climate-related information in its registration statements and periodic reports, such as Form 10-K. The proposed rules (see fact sheet, 3 pages and full proposal, 510 pages) are intended to enhance and standardize climate-related disclosures to address investor needs for more and consistent information about the impacts of climate-related risks on a company’s business.

While much has already been written about the high-level points surrounding the proposed rules, there are several notable details to consider.

The SEC’s proposed disclosures are informed by the Task Force on Climate-related Financial Disclosures (TCFD) and the Greenhouse Gas (GHG) Protocol, both of which have already been widely accepted by companies and investors. The GHG Protocol provides uniform GHG accounting standards, with a Corporate Standard designed for companies developing a GHG inventory.

As it relates to emissions calculations, the SEC notes that while it expects most companies to adhere to the GHG Protocol’s standards and protocols in calculating emissions, the proposed rules do not require this. According to the SEC, “[a]llowing for some flexibility in the choice of GHG emissions methodologies would permit registrants to adapt to new approaches, such as those pertaining to their specific industry, as they emerge.” The SEC provides references to various industry standards, including PCAF’s The Global GHG Accounting and Reporting Standard for the Financial Industry, American Petroleum Institute (API)/IPIECA’s guidance on Scope 3 emissions, and an initiative launched by Danone and Mars, with the Science Based Targets Initiative (SBTi), to provide Scope 3 guidance to companies in different industries.

Implications: Given the language surrounding industry-specific approaches to emissions reporting, particularly Scope 3, if the rules are finalized as proposed we could see more methodologies materialize over time. Issuers would be required to disclose the methodology used in emissions reporting, though the proposed rules provide flexibility in determining said methodology. This could open the door for industry associations to create advantageous industry-specific protocols. This is an aspect of the proposal upon which we expect issuers and investors may wish to comment.

While the SEC has used the GHG Protocol to inform much of the proposed rules surrounding emissions reporting, there is a notable divergence from the Protocol with respect to organizational boundary-setting. Recall that the GHG Protocol allows companies to determine the appropriate boundary for reporting, largely determine by the decision to use an equity share or a control approach.

Illustrative example of how reported emissions vary based on boundary 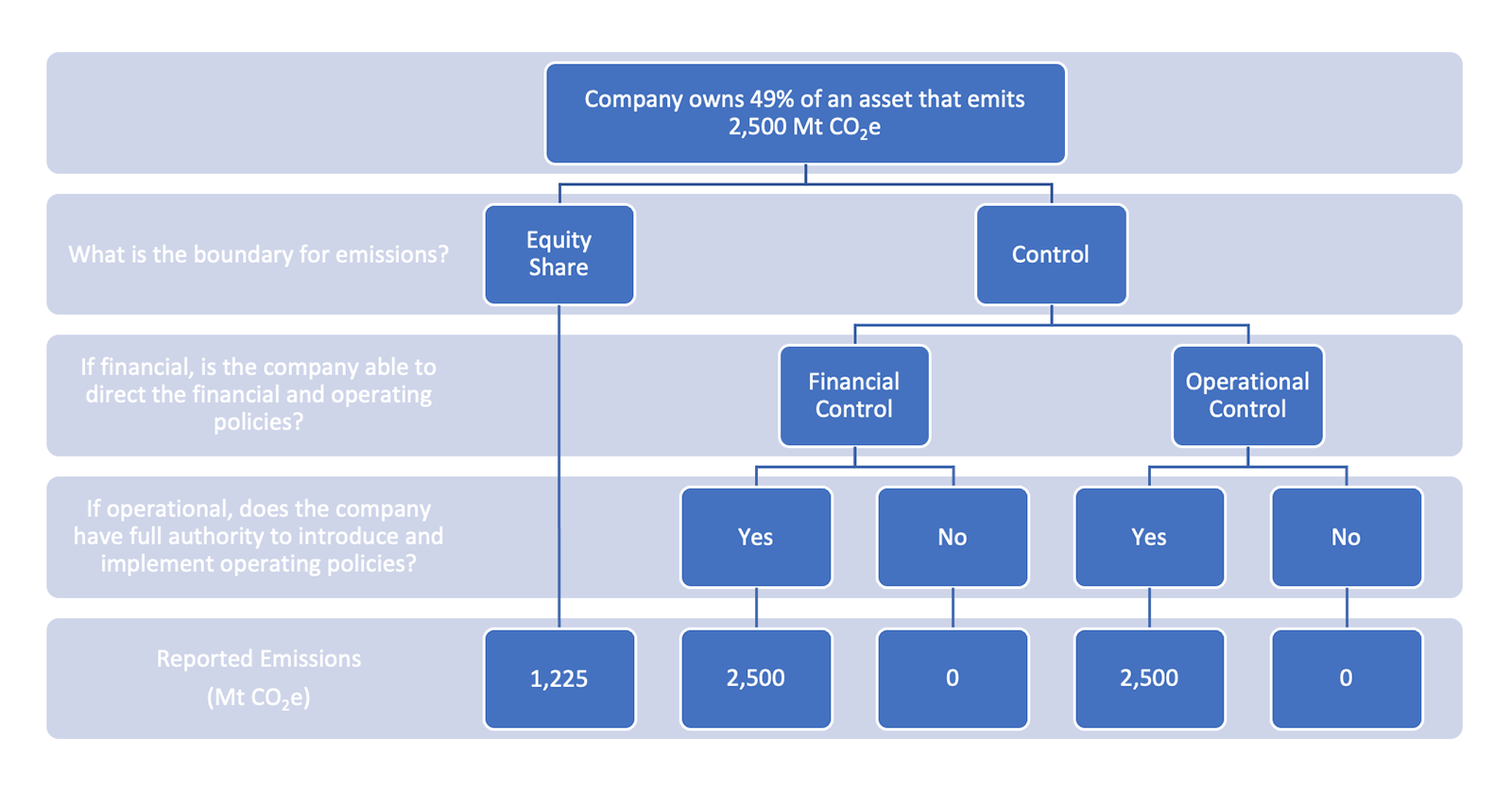 In the proposed rules, the Commission would require a company set organizational boundaries for emissions disclosure “using the same scope of entities, operations, assets, and other holdings within its business organization as those included in, and based upon the same set of accounting principles applicable to, its consolidated financial statements.” In other words, the proposed rules would require consistency in the scope of consolidation and reporting for financial data and GHG emissions data. According to the SEC, this change “better suits the U.S. financial reporting regime and the needs of investors.”

Implications: In our view, if adopted as proposed this change will increase transparency and comparability across companies, as it limits management’s discretion and ensures greater consistency in reporting, particularly for assets with multiple owners. Companies that have already disclosed emissions will need to ensure alignment between emissions reporting and financial reporting, which could require restatements to previous voluntary disclosures. We expect this would be most common for companies that historically utilized a control approach in emissions reporting.

While the proposed rules would require companies to report Scope 1 and Scope 2 emissions, Scope 3 reporting would be required only if emissions are deemed material, or if the company has set a GHG emissions target that includes Scope 3. Materiality is defined using the current Commission and Supreme Court construct of whether there is a substantial likelihood that a reasonable investor would consider the information important within the “total mix” of information considered in its investment or voting decision-making. The Commission notes in the proposed rule that there is no quantitative threshold for determining materiality, and that “even when Scope 3 emissions do not represent a relatively significant portion of overall GHG emissions, a quantitative analysis alone would not suffice for purposes of determining whether Scope 3 emissions are material.”

Corporate climate goals have often utilized simple messaging (such as “net zero” and “carbon neutral”) to signal a company’s commitment to decarbonization. However, the lack of reporting requirements surrounding climate goals has made comparisons across companies challenging. The SEC’s proposed rules would rectify this, requiring heightened disclosure to ensure transparency.

The Commission proposed several rules and disclosures designed to “provide enhanced transparency about targets and goals so that investors can identify registrants with credible goals and track their progress over time.” Companies would be required to disclose if any climate-related targets or goals have been set, what specific plans have been put in place to achieve those goals, and specific metrics to monitor progress. If enacted, the proposal would require companies to “clearly define baselines for targets, the scope of activities and emissions covered by the target, the unit of measurement, the defined time horizon, and how progress is made towards the targets.”

The SEC refers to a hypothetical example of a company with a climate goal commitment that would require decommissioning an asset by a target year. In this example, the SEC’s proposed rules would require the company’s depreciation expense to reflect alignment with its commitment, or disclose the rationale behind how the company expects to meet its commitment while continuing to operate the asset past the target date. In addition to depreciation, the Commission also flags potential disclosure surrounding estimated salvage value of certain assets, estimated useful life of certain assets, projected financial information used in impairment calculations, estimated loss contingencies, estimated reserves (such as environmental reserve or loan loss allowances), estimated credit risks, fair value measurement of certain assets, and commodity price assumptions.

Implications: If enacted, the proposed rules would increase the disclosure requirements for companies that have set climate-related goals or targets, and could potentially require companies to modify or revoke any previous commitments. The requirements surrounding disaggregated financial metrics – particularly the financial statement impacts of efforts to reduce GHG emissions – could be especially challenging for companies that have set climate goals that are significantly dependent on new technologies. We expect the heightened disclosure requirements could also make companies less likely to set climate goals.

Learn about how the SEC’s proposed rules on climate disclosure might impact your company’s strategy.