Following the publication of our 2019 Annual Corporate Governance Review, Georgeson is examining select topics in a series of "ACGR Insights" that provide in-depth analysis into select data sets. In our first ACGR Insights report, we review the current state of disclosure practices as it relates to investor engagement following a failing or "red zone" say-on-pay vote.

To conduct our review, we analyzed 2019 proxy disclosures of S&P 500 issuers that received between 0% to 80% of shares voted in favor of their 2018 say-on-pay proposal. Through our research we found a broad adoption of certain basic engagement activities and disclosures. We have also identified additional engagement practices and engagement-related disclosure utilized by a majority of issuers in our sample, as well as various examples of enhanced disclosure. We concluded that, for 2018, the lower the level of shareholder support received for a company's say-on-pay proposal, the greater the frequency of both standard and enhanced disclosure in 2019. Finally, we consider these activities in the context of the increasing ownership positions of the three largest passive investors: BlackRock, Vanguard and State Street.

Although say-on-pay is an advisory vote, companies are required "to address in the CD&A whether and, if so, how their compensation policies and decisions have taken into account the results of the most recent say-on-pay vote."1 Further, both of the largest proxy advisory firms, ISS and Glass Lewis, have specific policies around an issuer's obligation to show responsiveness to significant (≥30% and ≥20%, respectively) opposition to the vote from one year to the next, as do a number of institutional investors2.

Over 80% of the 43 companies from the S&P 500 in our sample included disclosure in their 2019 proxy about their engagement practices. We have separated these disclosures into five categories: 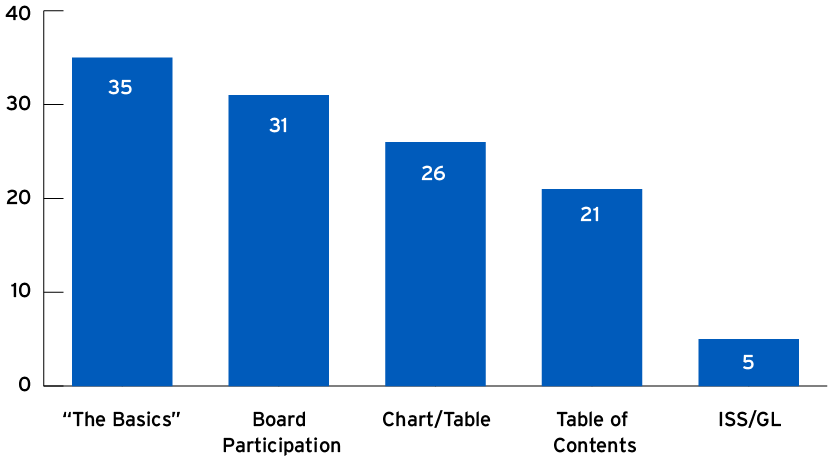 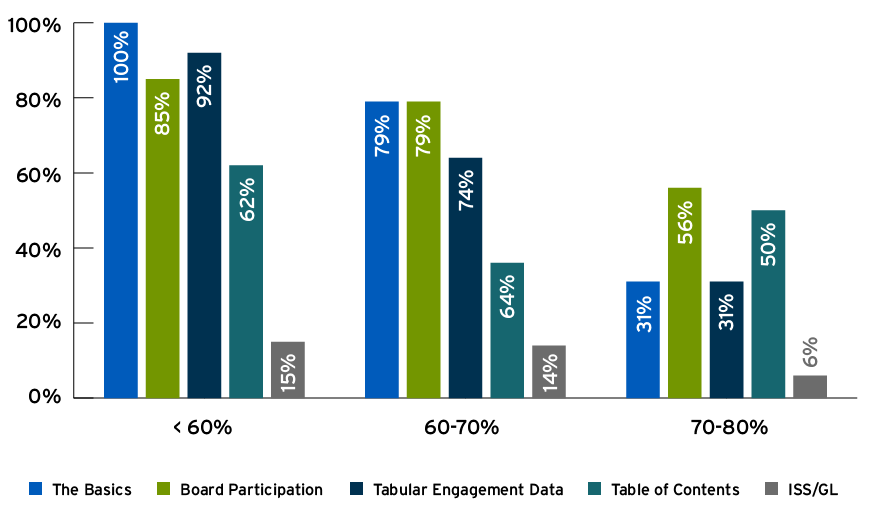 There is a clear correlation between a lower say-on-pay vote outcome and the inclusion of more robust engagement disclosure that goes beyond "the basics." Similarly, the board is more likely to participate in engagements at lower levels of say-on-pay support, although it is worth noting that a majority of companies in our set included directors in outreach even when the proposal received between 70 and 80% support.

Select variations of more comprehensive or transparent disclosures that we observed include:

Given the size and mandate of global investors, many institutions have robust proxy guidelines and stewardship teams. The stewardship reports produced by BlackRock, State Street and Vanguard ("big 3") provide a meaningful window into the institutional engagement activity. We reviewed the data from their stewardship reports to see how it corresponds with our issuer set.

The chart below shows the number of companies in our data set of 43 companies that BlackRock, State Street and Vanguard engaged with as disclosed in their respective annual stewardship reports. 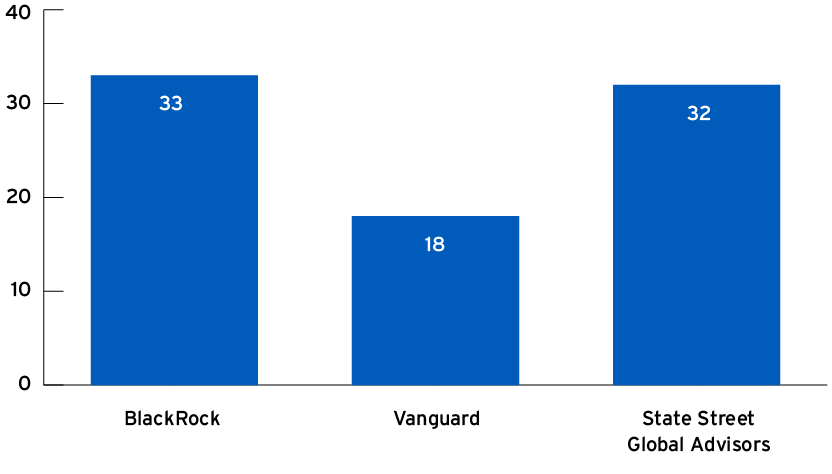 It is worth noting that none of the companies in our data set of 43 issuers received an against vote in 2019 from any of the three investors if they had not comprehensively engaged. However, SSGA did abstain1 from two of the companies with whom it did not engage. 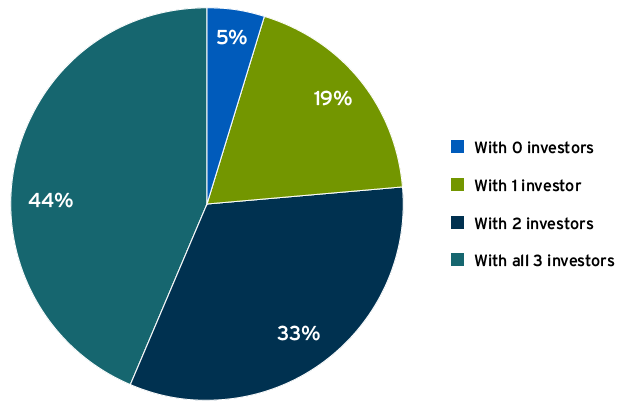 The above chart shows the distribution of the 43 S&P 500 companies with low say-on-pay based on the number of engagements with the "big 3" investors. There were only two companies – Broadcom and TripAdvisor  – that did not engage with any of the "big 3"  investors. In its 2019 proxy statement, Broadcom indicated that the compensation committee had engaged with more than 50% of its shareholders during fiscal Year 2018. Upon review of the results of the say-on-pay proposal from the 2018 annual meeting, the compensation committee concluded that the low 62% support was due to shareholder concerns that it believed it had addressed. TripAdvisor, which provides for a triennial say-on-pay vote, noted in its 2019 proxy statement that it received strong support for its 2018 say-on-pay proposal which was approved by approximately 72% of the votes cast. Although the company noted that it made certain changes to its annual bonus practices to address concerns raised by some of its shareholders, there was no disclosure relating to shareholder engagement.

It is important to ensure you and your company do not appear as laggards with regard to disclosure of responsiveness following failing or red zone say-on-pay results. Georgeson can help you devise an outreach campaign, prepare for individual engagements and compose subsequent disclosure for your proxy statement.

Contact us today to prepare your engagement plan by emailing info@georgeson.com or calling 212 440 9800.

1 Companies receiving greater than 50% but less than 80% of votes cast on say-on-pay.

3 Number does not sum to 500 because not all companies in the S&P500 elect to seek shareholder approval on an annual basis.

5 ISS will consider recommending against compensation committee members or in exceptional cases the full board based, among other factors, on an issuer's responsiveness to support of less than 70% of votes cast on say-on-pay. Glass Lewis will consider recommending against compensation committee members at companies receiving less than 80% support on say-on-pay, based on the absence of disclosure indicating the board is actively engaging shareholders and responding accordingly.

10 Read more about State Street's proxy voting policies, including when they abstain on say-on-pay, in our Georgeson report here.